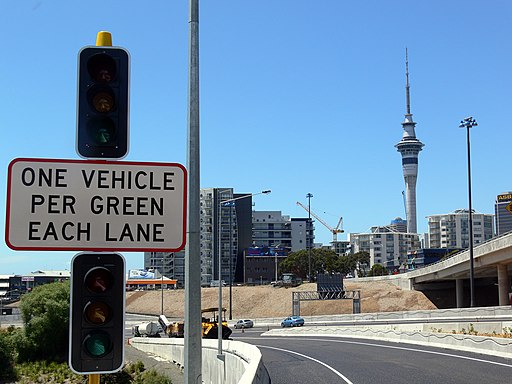 My family traveled to Minneapolis last weekend for a family function. We drove on several highways where they have metered on-ramps. There’s a sign that says, “One car per green.” Often, there are two lanes at the lights. The lights alternate one car from each lane. It’s a nice way to make sure the highway doesn’t become too congested too fast. We make way for each other.

I’ve only seen people obey these meters in Minnesota (and in California). We wouldn’t obey them in Massachusetts.

We might line up in the correct two lines. Then, one lane would push through three, four, five, maybe even 42 cars at a time, until the other lane got fed up. The first car would go, without making any eye contact with the person in the other lane. (This part is very important.)

We would have a free-for-all—which is what occurs on Massachusetts highways now. We do not make eye contact because we might have to make an allowance for the other person.

We don’t make way for other people unless there’s a reason to, such as a law. For example, several years ago, we finally passed a law that says the vehicle already in a rotary (traffic circle) has the right of way. Before that law, you might get into the rotary. You might find it a challenge to leave.

There’s a reason for that: too many Massachusetts highways have crazy merges: five lanes to two lanes in the space of a half-mile. The rotaries are tight and still allow for two lanes, not one. Cars don’t have enough room to make way for others. If you come to a full stop, you endanger yourself, never mind other people.

Yes, Massachusetts driving is not for the faint of heart. You need guts! Drive! Determination! And, a way to not make eye contact and still see where the other people are.

It’s part of what makes Massachusetts driving fun. (This kind of driving also occurs in Connecticut, Rhode Island, and some parts of New York. It might occur in New Hampshire. I don’t think Vermont or Maine have enough cars for it to occur. I could be wrong.)

As a family, we had a big laugh about the courtesy in Minnesota. We talked about how the metered ramps would never work here. Not the way things are now.

When we make way or allowance for others, we create a little ease in our world. We offer one person the opportunity to move ahead. Not an entire line of cars—just one car.

With ease, we all benefit. We make it a little easier for everyone to succeed. We have more opportunities for win-win, not win-lose. I wonder if this part of a scarcity or abundance mentality. I’m not sure.

That’s the question this week: How can you make way for others?

2 thoughts on “How Can You Make Way for Others?”

This site uses Akismet to reduce spam. Learn how your comment data is processed.

See all my books. Available everywhere.

A bunch of us in the "business of writing" bundle (https://storybundle.com/writing) got together for a live Q&A about the bundle.

My favorite bit? When @LorenLColeman said my comments are like gold and he had to write them down.

Had so much fun on this podcast!